Out and About with the Guild: Rosemary Barron

An occasional series in which we enjoy an adventure in the company of a Guild member. This month Rosemary Barron transports us to the Scilly Isles.

Scillonians certainly have a way with words. With moderate winds blowing, ‘lumpy’ was Bryher fisherman Mark Pender’s description of the choppy waters he’d navigated while out fishing that day. I met Mark and his sister Amanda a couple of years ago when I visited Bryher (pop: 70-80), one of the five inhabited Scilly Isles, to research an article for Food & Travel magazine. The 145+ Scillies lie 45 kms south west of the Cornish peninsula and, over the centuries, have witnessed hundreds of shipwrecks – of Norsemen, Tudors, the Spanish Armada; Scillonians have saved thousands of souls. I was curious as to the working life of the local fishermen.

There are around a dozen of them (smaller boats from the mainland can rarely reach the islands, due to the frequently inclement weather), and only a couple of families live on the Scillies year-round. No fishing takes place January-February as the seas are really, really lumpy. Until ten years ago, much of Mark’s catch – lobsters, crawfish, crab, some wet-fish – went to the mainland, frozen, and sold elsewhere. Then, he and Amanda decided to change tack. They had always wanted to make quality shellfish accessible for everyone, not just for fine-diners, so they set up a supply chain to provide local restaurants, pubs and cafés instead. Theirs is a family endeavour and they can trace their family back as far as the island records go. Their dad, at 76 years of age, still sets 100 lobster pots a day. Mark goes out on the boat around 6am, armed with the orders Amanda has received from local families and eateries the evening before. The day I met him he was unloading two very large baskets of fabulously healthy-looking 1-11/2 kilo crabs destined for Hell Bay’s (Bryher hotel) pop up Crab Shack.

After I read Mike Warner’s heartfelt words in February’s newsletter, on the latest problem to confront our fishermen, I called Amanda (Mark was out fishing) to ask her if the current Brexit situation was affecting them. ‘Not at the moment’, she explained, ‘as we sell almost all our catch on the islands’. And covid? ‘Yes, that’s been a problem as we normally have so many visitors. But I’ve added lobster burgers to the crab salad and dressed crab (my opinion: utterly delicious!) I always make, we’ve had grants, and our local customers are very supportive. We shall get through this.’ While I’d been talking to Mike Pender on Bryher’s tiny quayside, three mainland holidaymakers had been standing nearby, listening. Afterwards, they told me that they had never met a fisherman before or even seen a working fishing boat. That evening, at Crab Shack, they assured me that they’d had a wonderful experience – and food – that they would never ever forget. Hopefully, this will be the story for more of our bold fishermen in the future.http://www.islandfish.co.uk/

Lockdown has been a cripplingly difficult time for islanders, though the moment restrictions are lifted, visitors flock back. At the time of writing, the only way to get to the Scillies is by flying (Newquay or Penzance, weather permitting), but it is hoped ferries will begin again once lockdown has been lifted. 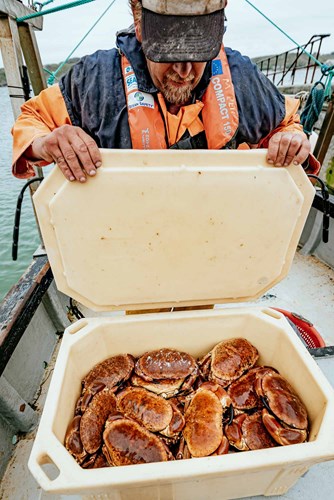